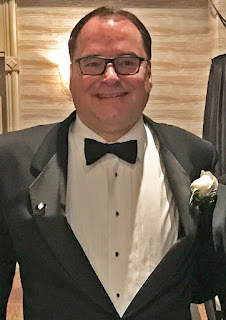 Biography for David J. Bondelevitch, MPSE, CAS
David is an Associate Professor in the Music and Entertainment Industry Studies Recording Arts Program at the University of Colorado Denver College of Arts and Media, where he has taught Audio Production I, II and III, as well as Surround Mixing, Audio Seminar and has revised the syllabus for Audio Post Production I (formerly called "Audio Sweetening"). In order to foster collaboration between the Film program and the Recording Arts program, David introduced courses on Dialogue Editing, Music Editing, Re-recording Mixing, and Sound effects Editing, well as the course History of 20th Century Film Music.

David is a music & dialogue editor and re-recording mixer. His most recent projects include mixing the documentary El Vacio, about immigrants who are in sanctuary. The film can be viewed on the NY Times website. He also mixed Fresh Tracks, about the man who designed modern prosthetics for skiing after WWII. The film has won festival awards as Best Documentary at the Three Minute Film Fest 2013, was an Official Selection for the Script Competition in the 2014 Life Fest Film Festival, was a NexTV Web Series & Indie Film Quarterfinalist 2013, and was a Merit Award Winner in the Best Shorts Competition 2013, and was an18th Annual Fade In Awards Quarterfinalist 2013.
David also mixed Empty Net, about the US paralympic hockey team. He is currently working on the documentary series Eco Quest and is prepping for the documentary Burning Sky.
David also mixed the documentary Southwest of Salem, which recently won a Peabody Award. He also mixed the cult comedy Jimmy Vestvood: Amerikan Hero. Previously, he mixed Driven to Ride, about women who ride motorcycles, and Above the Ashes, about a devastating fire near Boulder, which destroyed over 100 homes. The film aired on PBS. Bondelevitch won a Heartland Emmy as Associate Producer on the film. He was also nominated for Audio (as Sound Designer). The film was also nominated for an MPSE Golden Reel Award.

David also mixed the jazz album Step by Step for his longtime friend, jazz musician and multi-instrumentalist Ray Zepeda. The CD and downloads are available on CD Baby, iTunes, and Amazon. The album has been remixed into 5.1 channel surround sound on DVD-Audio, which is also available on CD Baby.

He also completed work on the mini-series Mile High Jungle, a National Geographic series about the Wild Animal Sanctuary near Denver, and their efforts to rescue abused circus lions from Panama and Bolivia. He was also music editor for the Tim Allen feature film The Six Wives of Henry Lefay, which is now available on DVD and BluRay and the Lifetime series State of Mind, starring Lily Taylor.

David has credits on over 200 films and television shows. He won a Primetime Emmy in 2000 in the category of Sound Editing for a Movie for his work as Music Editor on the TNT original movie The Hunley (starring Armand Assante and Donald Sutherland). He has also won Motion Picture Sound Editor Golden Reel Awards for his work as a music editor on the ShowTime musical film Ruby’s (starring Angela Bassett) and the Imax documentary film Island of the Sharks. He has been nominated a total of twenty-six times.

He is Past President of the Motion Picture Sound Editors, a society with a long history dedicated to recognizing excellence in the field of sound editing. For over fifty years they have hosted the MPSE Golden Reel Awards. Under his guidance in 2004, for the first time the organization hosted a second event, this one at the historic Egyptian theater in Hollywood. Big Movie Sound was a sold-out event and was very well received by members of the entertainment community. In 2005, a follow up Foley Show was equally successful. In addition, under his presidency, a membership drive increased active membership by ten percent.

Heis a board member of Cinema Audio Society and has formerly been Vice President and was Secretary of the organization for 15 years. David was a co-editor of the CAS Quarterly. David was also on the Board of Governors of the Heartland branch of the National Academy of Television Arts and Sciences.

David’s musical education began at age nine, when he took up the trumpet after seeing Louis Armstrong on television. While in elementary school, he began teaching himself piano and took recorder lessons. By the time he reached high school in Swampscott, Massachusetts, David was playing lead trumpet and flugelhorn in the jazz, concert, and marching bands and attended several jazz camps. He also studied privately with Paul Fontaine (featured soloist with the Woody Herman band).

In his senior year, David participated in a special program that allowed him to teach brass and percussion full-time to elementary and junior high school students. He also sang bass in the school’s chorus. In addition, he was interim conductor of his high school jazz band while the director was on medical leave. Self-taught at music theory, he began arranging for the jazz and marching bands at his high school, as well as for his own small jazz group, which performed locally.

David is the only person ever to receive concurrent Bachelor’s degrees from the Berklee College of Music in Boston and the Massachusetts Institute of Technology, matriculating at both schools in the same four-year period.

David played with the MIT Symphony Orchestra, including a performance at Carnegie Hall of the Persichetti Piano Concerto and Stravinsky’s Firebird Suite, as well as a performance of the music of PDQ Bach conducted by Peter Schickele. He also performed with the MIT Brass Ensemble, and played lead trumpet for both the the MIT Concert Jazz Band and the MIT Festival Jazz Ensemble (directed by Herb Pomeroy). His performances with the Festival Jazz Ensemble included two awards for Outstanding Ensemble at the prestigious Notre Dame Collegiate Jazz Festival. David also composed several pieces specifically for the Festival Jazz Ensemble. He graduated with a Bachelor of Science in Art and Design (where he studied documentary filmmaking with Ricky Leacock) and a humanities concentration in music.

While at Berklee, he studied composition with legendary jazz educator Herb Pomeroy and played in his ensemble. David also studied composition with Phil Wilson (arranger for the Woody Herman and Buddy Rich bands) and Greg Hopkins (arranger for the Buddy Rich band). He also took several courses on film scoring and studied trumpet privately with Mike Metheny (brother of Pat), Jeff Stout (featured soloist with Buddy Rich) and Wes Hensel (lead trumpet for Les Brown). David received his Bachelor of Music degree in Composition and Arranging.

While in graduate school at the University of Southern California School of Cinematic Arts, David played principal trumpet with the USC Community Orchestra and also performed with the Dave Pier Stardust Big Band. David composed and performed the musical scores to a number of his student films, ranging in style from Dixieland to contemporary atonal.

David has performed with several choral groups, including the Colorado Symphony Chorus, the Burbank Chorale (the oldest performing group in California), the Santa Clarita Master Chorale, the Cherry Creek Chorale (performing at the Breckenridge Music Festival) and the Littleton Chorale. He conducted choral sessions for films, including Black Knight, starring Martin Lawrence, and Tortilla Heaven, starring George Lopez. He has also had several compositions performed in films. He is a composer/publisher member of Broadcast Music, Inc.

He was a faculty member at the University of Southern California School of Cinematic Arts from spring of 1993 through 2008. He has taught Intermediate Production (310/508), Fundamentals of Cinematic Sound (242), Intermediate Sound (540) and Documentary Sound (547). He created the course Directing the Composer (473), the first course in the cinema program devoted to film music. He also created the first undergraduate non-major course on sound editing (340). He has also taught at Pasadena City College and guest lectured at the University of California Los Angeles, Loyola Marymount, Pasadena City College, University of Nevada Las Vegas, Columbia College Chicago, North Carolina School for the Arts, Chapman University, Savannah College of Art and Design, Ithaca College, the Art Institute of Austin and Rochester Community and Technical College.

While teaching at USC, David began semesterly meetings between the film and music programs in order to foster collaboration between the two schools. In addition, he instituted the first course in film music for aspiring filmmakers, Directing the Composer. He has also been interviewed along with composers Elmer Bernstein and David Raksin in Trojan Family Magazine. His musical analysis of the score to the film North by Northwest has been published on the web and is required reading at several universities. David also hosted the Film Music Network’s seminar on Music Editing in 2002.

He was a featured speaker at the 2000 Audio Engineering Society Convention at the Los Angeles Convention Center, where he spoke about Multi-channel Mixing. He was also an invited speaker at the I/ITSEC conference. He has been quoted several times in Roger Ebert’s “Movie Answer Man” column.

David is also a member of the the Academy of Television Arts and Sciences, the American Federation of Musicians (Local 47), the International Documentary Association, and Film Independent.

And he has nice table manners and smells good...

And very creative. Glad to have spent at least a short time under your direction at USC.

I played ball (bench, actually) under your Dad at SHS and knew your sister, Sally. I think my brother Paul took her to the prom in '72.