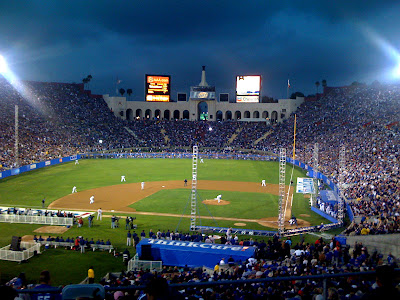 
It was an amazing sight, yet an eerily strange feeling to see the Dodgers playing where I usually see USC football. They did an amazing job turning a football stadium into a baseball stadium for a one-night event! The atmosphere was absolutely electric.

Unfortunately, the Dodgers did not look good. Fifth starter Loaiza did nothing to encourage keeping him in the rotation, except for the fact that he has a contract. Although only 2 of his 5 runs were earned, he pitched a scant 3 innings and threw an awful lot of balls, and the 5 runs all came on 2 homers over that tall left field net.

At the plate, Juan Pierre went 0 for 2 with a strikeout. I can't imagine him in the starting lineup. If Torre does not have the cojones to bench him, then I don't understand why we bothered hiring him. This is the exact situation an experienced manager was hired for. Having dealt with the Yankees egos for over a decade, he should be able to deal with Pierre.

Kemp got 3 hits and Loney got 2, including a home run.

Blake Dewitt looks like a keeper at 3rd base, hitting a 2-run homer and making 2 great line drive catches at third. He also made a high throw to 1st for an error, but here's a kid who has never played above AA ball, and suddenly he's in front of a 115,300 person crowd at the Coliseum. The kids are alright.

That was one very close left field fence!

But it was even taller than the green monster! Yet Youk still knocked one over it.