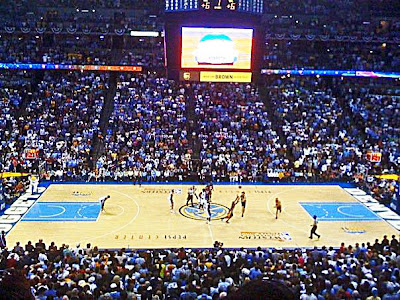 Being raised in Boston, it's quite natural for me to hate the Lakers. Tonight was my first trip to the Pepsi Center and I was very lucky to have gotten a ticket on center court for a playoff game. It's a nice stadium. It was a good game, with Denver in control almost throughout. Amazingly, they played great defense against Kobe and the rest of the Lakers, much better than two nights ago. They were also excellent on rebounds, which to me seems to be a lost art in the NBA.

Perhaps the best part of this is that it means there will be a game 6 on Friday, here in Denver, after Wedndesday's game in LA. The Nuggets will have to win a game in LA if they want to go to the finals, so let's hope the win Wendesday!
Posted by Bondelev at 5/25/2009 10:41:00 PM

Email ThisBlogThis!Share to TwitterShare to FacebookShare to Pinterest
Labels: Basketball