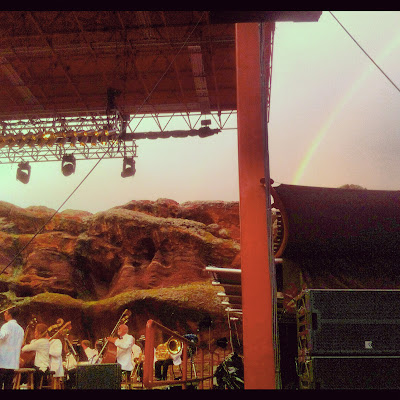 A rainbow finally appeared after heavy rains delayed the start of last night's Colorado Symphony Orchestra concert at Red Rocks, one of the most beautiful outdoor venues in the country. (Sorry, as much as I love the Hollywood Bowl, we have a much better view). The concert was an homage to John Williams and music of the movies. The concert was delayed 45 minutes due to the huge downpour (which we spent sitting in the car, then eating dinner in the restaurant). Once it cleared, it was a gorgeous evening in the mountains.

I've heard all this music many times before, but it is still a thrill to hear much of the Star Wars music played live. They did one goofy thing of having people in costumes parade across the stage while the orchestra was playing. As goofy as it was, I still got chills when Darth Vader walked out to the Empire March. The girl in the teddy bear outfit pretending to be an Ewok should have been shot on sight, though. At least Jar-Jar did not make an appearance.

It was a fun evening, with an excellent crowd, which makes me wonder why this is not a weekly occurrence here as it is at the Hollywood Bowl. In Los Angeles, they have at least three Classical concerts a week at the Bowl during the summer, in Denver, we have only one the whole summer? Can't we do better than this?
Posted by Bondelev at 7/09/2012 10:59:00 AM