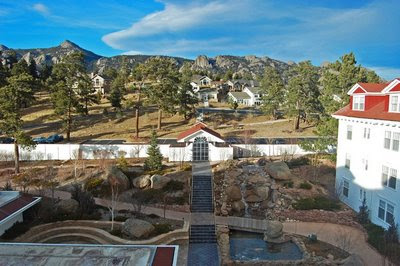 For our Thanksgiving holiday, we decided on a change of pace and are staying at the Stanley Hotel in Estes Park.

The Stanley Hotel is where Stephen King got the idea for THE SHINING. Kubrick used a different hotel in the movie... the real Stanley is much too close to civilization, surrounded by a mall and condos, but the mini-series was shot here.

Through a series of bizarre events, we were upgraded to a different room, one which is supposedly one of the haunted rooms. Normally I would not put much stock in such things, but the TV series Ghost Hunters shot here and had two paranormal events in this very room. The closest thing to strangeness since we have been here is a drawer that keeps opening itself. Even more strangely, after I pointed it out to my wife Rachel, it stopped. Our dog Riley also barks at an empty chair in the lobby. Otherwise, nothing special has happened, other than a pack of elk deciding to graze on the lawn just before sunset the other night. (Photo by my wife Rachel.) 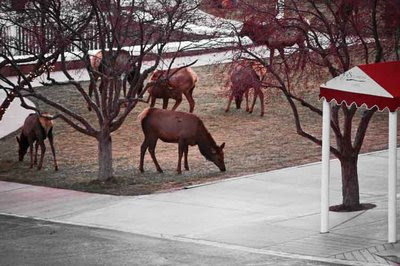 This morning there was a light dusting of snow everywhere, but it disappeared before we got a chance to photograph it.

It's been a great holiday, and another reason to be glad that I'm alive. This is the third year in a row that I have written about my thankfulness. Last year's can be read here. And the previous year is here.

As supporters of the orchestra, we were invited to an open rehearsal this morning of the CSO performing several pieces. The first was the Concerto for Keyboard in D by JS Bach, featuring conductor Jeffrey Kahane at the keyboard. I didn't know before the rehearsal, but it's simply a reworking of the ubiquitous E major Violin Concerto. It was interesting hearing it reorchestrated. However, the orchestra was too big for the piano, and the piano sound was overwhelmed. In addition, the theater-in-the-round design of the hall forced them to remove the piano lid, which never sounds right to me.

The second piece was Bloch's Schelomo, which is not one of my favorite pieces. The few memorable moments in the piece are overly melodramatic.

The highlight of the show was Prokofiev's Fifth Symphony, his most serious work, and a great orchestral showpiece. It runs the full gamut of emotions, from the dissonance of the WWII years when it was written, to the light-hearted second movement. The orchestra sounded absolutely fantastic, and I've yet to see better conducitng from Kahane. I'm very impressed.

Four years ago, when I was very sick and recovering from pneumonia and a two-week coma, I had plenty of time to watch TV in the hospital. I've always loved animals, and the hospital carried the Animal Planet, which I had not seen much. Every day I would wake up at 6 for breakfast, and then have nothing to do, so I would watch reruns of old shows on Animal Planet. One show that I fell in love with is EMERGENCY VETS.

As the title suggests, it's a reality show about life in an vet's ER. One of the things I liked about it was the real-life characters, including one of the vets who specialized in exotic animals. His own life had been somewhat exotic; he became a vet later in life, after being a bouncer for various rock acts including the Rolling Stones.

Little did I know that only a few years later, I would get a dog, move about a mile from Alameda East Veterinary clinic, and take my dog there.

Dr. Kevin Fitzgerald is also a stand-up comedian. As he says on the show, "Everybody laughed when I said I wanted to do comedy, but no one's laughing now".

We got the chance to see him at a local club on their comedy night. Unfortunately we had to sit through a half-dozen local comedians who were embarrassingly bad in order to get to the main act.

Fitzgerald is a good performer who connects well with the audience. He clearly loves his nights on the stage, and laughs heartily at his own jokes, in a very endearing way. He brought a pet he saved from near death at the clinic, a geriatric chihuahua named Yoda, who roamed the room while Fitzgerald told jokes.

To close his act, he made the strange choice of dropping his pants and tap dancing. His tap dancing was very bad and was clearly a routine designed for children. I'm not sure if it was even supposed to be funny, but it was well-received by the crowd, which was clearly on his side.

The CSO tonight gave a live performance of the score to Chaplin's masterpiece film, CITY LIGHTS. This is my favorite Chaplin film, perhaps because it is also his most sentimental. It's also a bit of an historical oddity. The film was released in 1931, years after the silent era had ended. Chaplin insisted that the sound film was a passing fad, and kept the tramp silent. The film has a soundtrack, but it was mostly music. Chaplin "composed" the music for the film, although he could not read or write music. He could play several instruments and dictated the score to an assistant.

The orchestra played quite well, but the projection screen was embarrassingly tiny and difficult to see. They really should have invested in a larger screen.
Posted by Bondelev at 11/15/2008 10:11:00 PM No comments:

STAR TREK AT THE SYMPHONY

The concert had a lot of problems. It was too long, and the banter between the 2 Trek alums was terribly written. (By them.)

The pieces on the concert were in chronological order, from Sandy Courage's music for the pilot, through the 6 movies and the three TV shows. In almost every musical choice, they played the main title music, which provided a lot of redundancy. ST: The Motion Picture main title, AND The Next Generation? They are the same piece!

Throw in the lousy music from VI, a piece from Generations, and the theme from DS9, and there was a LOT of fluff and redundancy. The orchestra sounded good for the most part, but the brass section could have used a few more rehearsals, and the percussion was persistently loud.

The best piece of the evening was the suite from "The Cage." Unlike most of the other music, it was not just a theme, it was actual score music from the pilot, which was used many, many times in the series. It was surreal hearing the music and re-imagining the many scenes it had played under. Alas, they never played the Kirk/Spock "fight to the death" music, perhaps the most memorable music from the whole history of Trek.

There is a great history of composer involvement with the show. Courage's horn call is simple but brilliant. The samba theme is dated, but a beautiful melody. Jerry Goldsmith scored TMP, V, and wrote the theme for Voyager, and James Horner scored II & III (borrowing liberally from his predecessors). If they had stuck to that material, and maybe threw in some more material from TOS, it would have been a much more enjoyable evening.

A very small number of people came in costume. The best were a few Klingons. Most wore lame uniforms.

The hall was not sold out, and a considerable number of people left at intermission and did not return. It was a long concert.
Posted by Bondelev at 11/01/2008 11:43:00 PM No comments: