The first half of the program was completely uneventful. The Schumann would have been better if the Scherzo had actually been taken at a scherzo tempo instead of a waltz tempo. I understand that O'Neil is well liked by the musicians, but his conducting is not very complex. He uses his left hand far too much for tempo and rarely indicates interpretation.

Perlman's presence made a huge difference in the second half. His sound is amazing, especially on this low string. It was a little bit of a letdown to hear only Mozart, it owuld have been nice to hear him interpret a Romantic piece as well, but he did play beautifully. If I had to find a criticism, it seemed like his intonation was inconsistent. Boettcher hall has very strange acoustics and I wonder how well he could hear himself. The seating is in the round, so there are no walls reflecting sound back to him. He should have been able to hear the strings directly behind him so it's likely that his own sound was the problem.

The Mozart pieces were quite nice. The house was full, and the audience was very appreciative. However, having seen Yoyo Ma the year prior on the same stage, there's no question that Ma is the more engaging performer. Perlman was clearly enjoying himself, but Ma was clearly full of love for the music on a level I have rarely seen.
Posted by Bondelev at 4/28/2011 09:11:00 AM No comments:

PUBLIC SPEAKING is an HBO portrait of the brilliant and witty writer Fran Lebovitz directed by Martin Scorcese. I wouldn't call it a documentary, it's sort of a cross between a one-woman show and My Dinner With Scorsese, although he barely speaks. A real documentary would have asked a woman who spends much of her time talking about gender identity and gay rights to talk about her own sexuality.

She's very smart and funny, so the film stands up well with just her, even though she is so opinionated she will eventually rub you the wrong way with something she says. The film would probably work better at an hour length, rather than an hour and twenty minutes. Still, it's worth watching. It did made me miss New York.
Posted by Bondelev at 4/24/2011 10:04:00 PM 2 comments:

The two Zimbalists who directed the documentary THE TWO ESCOBARS came to UC Denver in February to talk about their film, but alas I missed it, as I had another commitment that night. So I rented it via Netflix.

It's a fascinating story about Pablo and Andrés Escobar (unrelated), the Colombian drug kingpin and Colombian soccer star respectively. It's one of those "truth is stranger than fiction" films which would be completely unbelievable if it were not actually true.

In the end, the film works, mostly due to the story. The film-making technique actually gets in the way. The whole style of the film pretty clearly wishes it could have been an episode of the History Channel series GANGLAND. The visual style and the musical styles are almost identical. I'm not sure why they felt the need to make the style more important than the substance. When the story is this good, just let it tell itself.

The film also could use a good editor. Structurally, the film seems like it is about to end about 2/3rds of the way through but then keeps going on forever. It switches from gangster story to sports melodrama with no transition or explanation. I'm guessing that since the movie wound up on ESPN, they were pressured to overplay the sports aspect of the story. It's a good sports story, but this lengthy structure just doesn't work. It's at least 15 minutes too long, and it certainly feels odd to follow Pablo through most of the film and then suddenly switch gears to Andrés.

Obviously I am catching up on missed films seeing HOT FUZZ years after it came out. From the gang that brought is SHAUN OF THE DEAD. This film is certainly flawed, the second act is about an hour long, and basically one long lull before the storm of the final act, which completely redeems the film by kicking major ass. The film works best when it is a parody of American cop buddy/action films. Unfortunately they fill out the second act with a parody of slasher films, which has been done a zillion times, and much better, not even counting the SCREAM movies.

The one thing that stands out about both this and SHAUN is that these guys can really write a screenplay. Even if you took the jokes out (and there are not nearly enough until the final act), this film would be a completely coherent story. Also the guys can act too, although that was more obvious in SHAUN. But the real reason to watch this film is the last 30 minutes, which is friggin' brilliant. 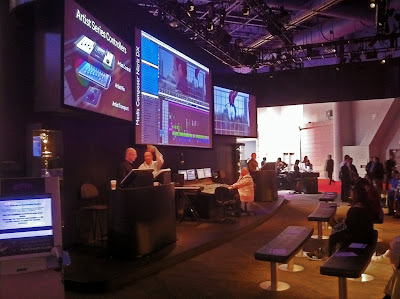 I have to rethink my plans to visit NAB on the last day. For years I would go in Sunday and leave Tuesday, which meant I had to deal with the crowd on opening day. Thursday is the only day that fits into my current schedule, so the last two years I've gone for the last day. Last year it seemed like a smart move, it is definitely the slowest day at the show, but partly because the show wraps at 2PM so most people go on days where they can see more. I'm pretty good at getting through a show quickly, but a half day may be too short.

This year was not at all impressive even though crowds were reported to break the 92,000 mark, up quite a bit from last year. The show itself did not seem as huge as previous years. Most of the south and north halls held very little of interest.

The layout of the show seems to be less and less organized each year. Avid was on the upper layer of the south hall. Audio was was all over the place. It was almost impossible to avoid having to go to every hall.

There was not a lot in terms of new announcements. TV manufacturers are still pushing 3D TV but there were no innovations as far as I could see. Avid barely represented Digi at all, they had one C|24 on display. The biggest announcement came from someone who was not even exhibiting: Apple. Final Cut X will be only $299. There will no longer be a difference between the Pro and Express versions. But then, no one was showing it, it's vaporware until June at the earliest.

I did have fun as always, but I hope next year shows off more innovation. I may have to skip a class to next year, and avoid being there only on the last day.
Posted by Bondelev at 4/17/2011 08:18:00 PM No comments:

How did I miss this film? It's a documentary from 2009 about the cult following that the terrible film TROLL 2 has amassed in the two decades since it premiered. This is definitely one of the most interesting documentaries I have ever seen, and it's about the movie biz!

Like most good documentaries, this one is filled with characters and takes many bizarre twists and turns. The film is made by one of the child actors in the film now that he has grown up and become a filmmaker. It centers mostly on a dentist from Alabama who had starred in the original film and now finds himself in the bizarre predicament of having made one movie: the worst movie in history, according to its ranking on the IMDB at the time the documentary was made.

The two filmmakers were Italian and apparently still think the film is quite good even though they attend fan events which rip the film to shreds.

This film is so interesting that I watched all the DVD extras immediately afterward. Many of the deleted scenes contain nuggets of gold as priceless as what is in the movie.

Perhaps the most distressing thing is that it reminded me of many of the films I have worked on.