Who Needs the Kwik-E-Mart? 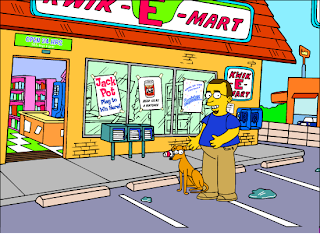 
My wife is a huge fan of THE SIMPSONS. In honor of the movie, a dozen 7-Eleven stores were converted into Kwik-E-Marts for the month of July. Fortunately, one is near us in Burbank, so we drove by several times this month, hoping to stop by, but there was always a line around the block. We finally gave up and got in line today, knowing it would only be there a few more days. It took about 25 minutes to get in, and we spent a good ten minutes in the store.

My wife bought a Pez dispenser with Homer's head, and we got two pink doughnuts, which were amazing (much better than Krispy Kreme). Channel 7 News was there when we were there. My favorite subtle reference was the frozen Jasper in the freezer.

They did not do DUFF beer, but they did BUZZ cola (limit one 6-pack per customer). I wanted to buy CRUSTY-O's cereal, but they were sold out. That place is a license to print money. They could have done 10 times as many stores and still have lines around the clock.

This one is near the writers' office, so it has even more extras, "real" Bart tagging on the outside, and hand-drawn caricatures inside. I took a bunch of pictures with my digital camera, then somehow reset the menu language to Japanese, then in trying to fix it, I reformatted the card, erasing all pictures. I'm an idiot. Fortunately, the one photo above of me with Riley came out.

Nice photo of you in Springfield, VT. Next, you need to put Riley in the photo!