BUGS BUNNY AT THE SYMPHONY (redux) 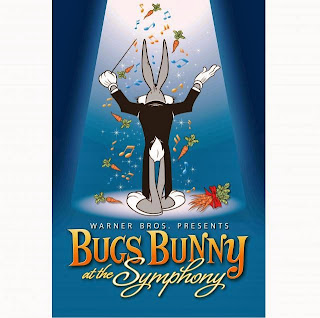 BUGS BUNNY AT THE SYMPHONY (redux) is our second visit to see this show. The first time was at the Hollywood Bowl three years ago, at which they announced that they were retiring the show for a year to re-conceive it. The show had been on for 19 years, so it was time for a break, although it was a blast to see it at the bowl because so many of the cartoons take place there.

Tonight was performed on New Year's Eve's Eve, to a large crowd in Denver with the Colorado Symphony. The show was just as enjoyable as before, although I'm sorry they did not show ONE FROGGY EVENING. Like before, only about half the show is live orchestra, the rest is the original cartoons with the original performances of the music. Perhaps the highlight of this live performance was a Road Runner cartoon, which showed off the orchestra's incredible abilities. Carl Stalling was insane, that's all I have to say.

The lowlight of the evening were three pieces for Tom and Jerry, Scooby Doo and the Flintstones. The Tom & Jerry short probably would have been OK if we had not just seen two VERY similar (and much better) Bugs Bunny cartoons. The other two montages were clearly aimed at the youngest audience members. I have to admit it was great to see so many kids laughing at the WB cartoons decades after I discovered them, which was already decades after they were made. If you get a chance, see this show. You will love it!
Posted by Bondelev at 12/30/2011 10:59:00 PM