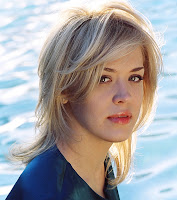 Olga Kern returned to the CSO this weekend, this time to play the Grieg piano concerto under conductor Peter Oundjian. The concert opened with the crowd-pleasing Russlan and Ludmilla Overture of Glinka. As always, the orchestra played well, and Oundjian conducted quite nicely. There was quite a nice house for a Sunday matinee, undoubtedly there to hear Ms. Kern.

She joined the stage to perform the standard Grieg Concerto. Although she is known for her performances of the Rachmaninov concerti, it is always a pleasure to hear her play. She held back a bit on the opening of the first movement. To be fair, this piece is so overplayed, it's tough to bring something new to it. Without a doubt, the highlight of the piece was her performance of the second movement, which was beautiful and moving. You can really tell when a performer is enjoying her work, it comes through in the playing.  I will always look forward to seeing her perform. My wife and I are particular fans of Olga's playing; my previous reviews of her can be read here. She played a nice encore of the Flight of the Bumblebee (Rimsky-Korsakov). If anything, she played it too fast, robbing some sections of musicality, but hey, that's why people play that piece.

I was not that excited to see the Shostakovich Symphony #11 on the program. His orchestral works can be very dry and intellectual, although the fifth and the tenth have enough power in them to be enjoyable even to the casual listener. I was quite surprised to hear how wonderful a piece it is when performed live. The movements are all connected and play together as one hour-long piece. It started off as an elegy, but lead to a number of moving climaxes, driven by creative use of percussion.

There is a good amount of dissonance in the piece, but no so much that the audience was turned off. (I was surprised to see that most of the audience remained after Ms. Kern left before the intermission, even knowing the long piece was ahead, and that they rose to their feet at the end of the symphony.) It turned out to be the highlight of the afternoon, even eclipsing Ms. Kern. I think that the conductor is a good possible choice as permanent conductor. This is the third time I have seen him conduct, the first reviews can be seen here. This is the second year there has been no principal conductor for the group. With their recent economic problems apparently solved, I think the next step is to find a full-time conductor for the orchestra.