Gabriel Kahane was the guest of honor last night. 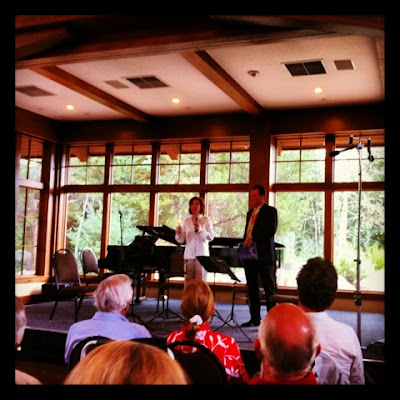 Apologies for all the typos. Blogger has yet to work on a good interface for the iPad.

Night one of the Bravo Vail new series was a stunning success (see my previous post)  but last night was a complete cluster. You know there's a problem when the guest of honor announces that the first half of the evening will be completely different than what is on the program, then spends ten minutes talking about what is going to happen, including announcing that he is going to talk.

Gabriel Kahane, conductor Jeffrey Kahane's son was the guest, in a series designed to mingle new and old music. It's a great concept, but Kahane was a terrible choice.  First off, old the big name guest for the second half of the program. Get people interested with some good music in the first half, then they will stay for the second. The whole program was very long.

It began with Kahane singing one of Franz Schubert's songs. It was a nice start, but Kahane's pop head voice could not be more poorly suited to the music. Let a real classical singer handle this. He followed this with an introduction for the Calder Quartet to perform the Ades Arcadiana for String Quartet. Then one of the violinists from the quartet spoke at length about the Ades. A brief piano piece had been performed the previous night to much success, but this lengthy seven-movement mostly atonal piece was a complete bust with the audience. At least half of them left at the break, and I think this piece was a big part of that. Had this piece been dropped form the program, it would behave been a reasonable length.

Kane then returned to the songs, intermingling Schubert with several of Charles Ives song,s including my favorite of the evening, "Tom Sails Away." it would have made more sense to sing these all together rather than interrupting with the Ades quartet. And again, these songs cry out for a lyric baritone or tenor.

Kahane then performed a lengthy original work, Come on all you Ghosts based on the interesting poems of Matthew Zapruder. Obviously his folk-sounding voice fit this music better, but it was not a crowd-pleaser. This should have been the final piece of the night, keeping his fans in the audience until the end of the evening.

After a very lengthy intermission (where the was not nearly enough food) the second half of the program featured a set of music for four hands.  This set was by far the best part of the evening, much like the previous night, but most of the audience missed it because they had left. But a groups of short pieces by Ligeti, Bach, and Wolfgang Rihm were wonderfully played.

In another strange programming turn, the concert finished with Schumann's Quintet in E flat, performed by a different quartet, the Jasper, whom we heard on a previous night.  This was the biggest crowd pleaser of the evening, although I'm not us why it was in this program, why it was last, or why it was a different quartet playing it.

I hope to tonight's concert will be much better programmed. Tonight features a new piece by Steven Mackey for electric guitar and string quartet.