Written and directed by Sean Penn, INTO THE WILD tells the story of a young man's journey to independence and freedom in Alaska. There's a lot of great stuff in the film. Penn is an outstanding director of actors. Hal Holbrook's performance alone is worth watching.

However, he's got structural problems with his writing. The decision to tell the story through flashbacks, with literal chapter markings in the film (and the chapter titles are literally what is going on in the scene), he could have used some help with the screenplay. But the cinematography and sound are great. 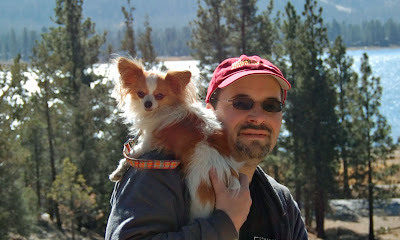 A year ago, I wrote one of my most popular postings about all the things I have to be thankful for.

This year I have all the same things to appreciate, and one thing more... our dog Riley. My wife Rachel found Riley for us last January, and he has been a hugely positive influence in our lives. Dogs are wonderful. He is a pisher at times, but more often than not, he is a bundle of undying love. I always feel better when I get home and see him jumping for joy (literally). I think everyone should have a dog.

This year we celebrated with a fantastic dinner, and then watching USC beat Arizona State, which brings USC one step closer to the Rose Bowl. They still have to beat UCLA next week as their final regular game of the season.

Email ThisBlogThis!Share to TwitterShare to FacebookShare to Pinterest
Labels: 499, 546

Only a few weeks ago, I was having lunch with a friend of mine who had made a few documentaries, and we were talking about how PBS has fallen apart as a source for intelligent television. I had pointed that how I knew scientists who had tried to get documentaries on the air, but were rebuffed when it was explained to them they they could not mention evolution or global warming because they were "hot topics."

Imagine my surprise when NOVA finally grew some gonads, and this week's episode was a two-hour exploration of the Dover, Penn. court case from three years ago, when science was put on trial in the courtroom (yet again). Honestly, it took a lot of courage to show the "Intelligent Design" argument from both sides... there really are NOT two sides to the argument.

It's just appalling to me that 150 years after Darwin, people are still arguing Creationism.

The real issue is that the founding fathers were wise enough to demand a separation between church and state, and here we are 230 years later, and the religious right are still trying to reunite the two.

This show should be required viewing for every school child, not only to learn the scientific method, but to understand how some people will blur education with a personal agenda. In this case, religion is used as blanket protection against any sort of criticism or serious examination.
Posted by Bondelev at 11/14/2007 10:49:00 PM No comments: Links to this post

Email ThisBlogThis!Share to TwitterShare to FacebookShare to Pinterest
Labels: 547

Email ThisBlogThis!Share to TwitterShare to FacebookShare to Pinterest
Labels: 499, 547

The first quarter wasn't pretty, but USC showed a commanding win over Oregon State. Booty was a little rusty after a few weeks off, and he looked like he still lacks confidence. But the important thing is that they had a big win.

Email ThisBlogThis!Share to TwitterShare to FacebookShare to Pinterest
Labels: football