André Watts and the CSO 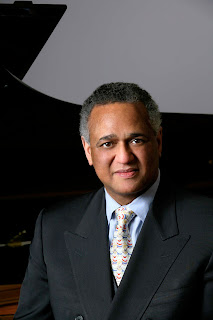 André Watts joined the Colorado Symphony Orchestra last night under conductor Gilbert Varga. The concert only had two pieces but dragged on very long, no thanks to another interminable intermission. Also the pacing of the two pieces was odd. The first half was an amazing performance of Tchaikovsky's Pathétique Symphony (#6), which is always a crowd pleaser, and was wonderfully performed here as an orchestral showpiece. This was our first concert of the (abbreviated) year, and it's always a surprise to me how good this orchestra is. Every section stood out at some point.  I'm sorry the orchestra is doing fewer concerts this year, but I am just glad to see that they are still alive.


Varga was an entertaining conductor. At one point in the Pathétique  it looked like he was trying to pick a fight with the first violins. Later it appeared as though he stopped playing entirely. It was also nice to see that the orchestra has hired a woman has principal trombone (albeit on an interim basis). And that The Most Interesting Man in the World is now playing in the bass section.


Opening with a huge work like the Pathétique meant that almost anything in the second half would be a letdown. And it was. Watts played very well on the Brahms Second Piano Concerto (I had never noticed how difficult it was until seeing it played in person), but this is not a show-stopper. They would have been much better off flipping the order of the program. I'm sure they thought that Watts was the draw, and they were afraid people would go home at the intermission, but instead the reverse was true. The Brahms does not quite have the same memorable themes as the Tchaikovsky, and instead, being a long four movements, people exited the hall after each movement. Although to be fair, the hall had a pretty good (but not great) turnout for opening weekend.

Strangely the orchestra had a harder time with this than they did with the Pathétique. The horns were out of tune most of the first movement (did they tune after intermission?) and there were a few wrong notes here and there.

But my biggest complaint is the length of the intermission. It was at least 20 minutes between the two pieces. This really kills the pacing no matter how brilliant the performances are. Please fix this. It has become a very common complaint.
Posted by Bondelev at 9/30/2012 10:21:00 AM No comments:

I am very proud to announce  a faculty recital featuring myself and our special guest, my good friend of three decades, Ray Zepeda!

This concert will celebrate music from Ray’s new CD Step by Step, as well as originals by Asst. Professor David Bondelevitch, who will be performing on percussion. The music from Step by Step is also being released as a DVD-Audio in 5.1 channel surround sound! Both the CD and DVD were engineered by Bondelevitch.

The concert will also feature three other MEIS faculty members: Drew Morell on piano, Ron Bland on bass, and Todd Reid on drums.


FREE PARKING in the King Center parking lot. Be sure to pick up a pass when you enter the theater!