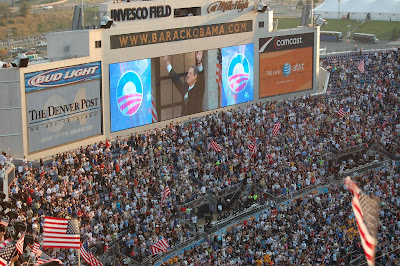 It was an amazing evening to be there. I consider myself incredibly lucky to have not only lived to see it... but to get tickets to be there in person.

They were urging people to get there as early as 1PM, but I knew that would create a rush to beat the rush, so we looked at the schedule and decided to try to get there at about 5PM. We ended up leaving later than expected, but there was plenty of parking at the light rail, and the trains were almost empty. We were forced to get out a stop early, apparently there had been a huge backlog of people earlier in the day, so they were making people get off further to alleviate congestion, and it worked. We walked straight into the stadium in about 15 minutes.

I was surprised by a lot of things. I expected a lot of nutty protesters, and although there were a few (I was not surprised to find out that I'm going to hell), there are more at Laurel & Ventura on a Friday night.

Security was weird. We had been told that all tickets had been registered with names and that they would be scanning and checking IDs at the gate, but they did neither. No one scanned our ticket, no one asked for ID. I could have sold (or bought) my tickets on Ebay.

Security was weird. The metal detectors were pretty much it. They did look carefully at my keychain; I think they thought the mini flashlight was a crackpipe and would not let me through until I lit it up. (The flashlight, not the crack.)

We got there at about 6. I was excited to see a number of the speakers. We got there just as Sheryl Crow started her set. I'm not a huge fan, but she was pretty good until she sang a song that wasn't hers and her vocal weakness cut through.

Mark Udall was good. Tim Kaine was better, and Bill Richardson was great. I think he would have been a good VP choice. We were seated on the top level, behind the stage, and although we still had a good view, it was hard to hear, particularly when a speaker got a good crowd response. It looked like they did very little sound reinforcement, so it was probably loud on the field and soft and muddy up top. It's too bad, they could have easily told people to bring AM radios and played it on a local station with no delay, as well as add captions to the large video boards (everyone was speaking from a TelePromTer, even the singers' lyrics).

The crowd got increasingly louder throughout the night, until Obama was imminent, and then they became so quiet you could hear a pin drop. The crowd was a little sparse when we got there, but by 8 there were hardly any empty seats.

Stevie Wonder was good as always (we've seen him at the Grammys), he's the consummate pro as a musician. 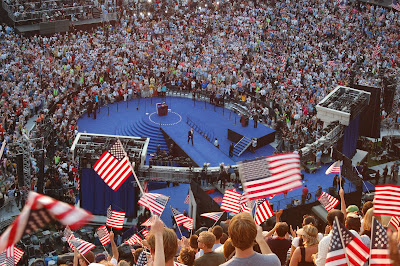 I've also heard Al Gore speak in person before. I said it in a previous blog post, but his media image is completely different from what he's really like. He's an extremely engaging speaker, intelligent, funny, and animated. I don't know how or why the media has made him look so bad. He was very, very good tonight, going on the offensive on a lot of important topics. His speech had more substance than any of the other speakers I saw, other than Obama.

Michael McDonald thankfully was limited to one song. Alas, he stole Ray Charles' signature song and butchered it.

Susan Eisenhower also had good text, but was not a dramatic speaker.

It was VERY smart to get the retired military on stage with him. So much for lack of experience. These guys could have waged a war without leaving the stage.

The 6 Average Americans were also great. It seemed a little heavy on the women - Obama's already got the woman vote - it seemed that it would have been smarter to get more middle aged white guys on stage; they are his weakest following.

However, it was great to see the mix of people in the crowd. Young, old, male, female, white, black, Latino, you name it. There was a sense of camaraderie not only in the crowd but even on the train home. People were really excited that change might finally happen.

Dick Durbin was good too. 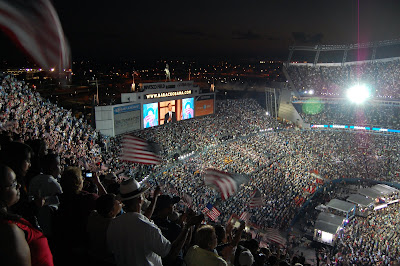 But the night belonged to one man. He has a huge presence. I think the applause for him could have gone on for an hour. The video tribute before his entrance was very moving. The crowd of about 85,000 people was silent, and many moved to tears. 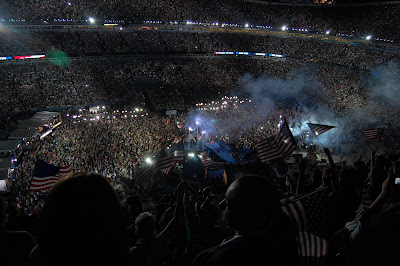 Email ThisBlogThis!Share to TwitterShare to FacebookShare to Pinterest
Labels: politics

The Dodgers squeaked out a victory over the Rockies after losing 2 in a row to them. They are still back from the D'backs.

Lowe gave up a run in the 1st but the rest of the day looked quite good. Kuo did well in 2 innings of relief, and after a leadoff hit, Broxton struck out the side with many of the pitches clocked at over 100 mph.
Posted by Bondelev at 8/21/2008 05:29:00 PM No comments:

The Rockies looked better tonight, with Brad Hawpe going 3/3 with a walk and 2 RBIs. Francis gave up 3 runs in 6 innings, but Manny Corpas blew the hold, so the win went to Taylor Buchholz.

For years I had intended to buy THE CUBE, which is a really nifty way of storing a lot of CDs or DVDs. I have a lot of both, and they take up a lot of space. I just never got around to reorganizing them until my recent move, and now I've compressed a lot of storage space. It's a really nice, solid piece of furniture. Definitely worth the price, and highly recommended.
Posted by Bondelev at 8/11/2008 09:24:00 PM 1 comment:

Wednesday's game was rained out.

Friday's game lasted 2 innings before the rain stopped play for an hour. The Rockies ended up beating the Padres' best pitcher, Jake Peavey, 6-3.

Saturday's game vs. the Padres appeared threatened by rain at first, but it turned into a nice night for baseball, until a 5-run 6th inning broke the 1-1 tie and gave Greg Maddux the win for the Padres.

The Rockies have a lot of young talent, but this year pitching seems to be the major problem, even their best starters are not making the best of it.
Posted by Bondelev at 8/10/2008 10:57:00 AM No comments:

As a life-long Red Sox fan, and a Dodger season ticket holder of the past few years, people have asked me my opinion of the Manny trade.

Manny is one of the best hitters in the game. But off the field, he has always been a mess. He never liked playing in Boston, where he felt the media intruded on his personal life. (Good luck dealing with TJ Simers in LA!)

Boston put up with it because he was a great player, and even when he twice asked for trades, Boston kept him. However, this year he brought his problems onto the field. First he refused to swing at pitches, then he called in "sick" when he appeared to be fine. The Red Sox had had enough and put him up for trade.

It's a very strange scenario, because he's in the final year of a contract, so any team that picks him up gets two months out of him. It's a good move for the Dodgers. They gave up practically nothing for him. Andy LaRoche, who has been a bust at 3rd base, and a minor league prospect.

For Frank McCourt, in the 24 following the signing, they sold 11,000 tickets to tonight's game, making it a sellout. Compare that to the anemic crowd from last Friday, when they had so many leftover bobble-heads that they were still giving them out on Sunday.

For the team, it's the big bat they need.

However, there are still problems. Manny is probably the only outfielder in the game whose defense is worse than Juan Pierre's. There's a LOT more field to cover in Dodger Stadium, and it will take him a while to get used to it. You can't put them both him and Pierre in the game at the same time. Neither can play center or right. So you lose your lead-off batter when you put Manny in, and you lose your cleanup man when you put Pierre in.

The infield is a bit of a mess as well. Furcal is gone, Nomar is in and out, and Kent's showing his age.

Worst of all, the pitching is a much bigger problem. There is only one starting pitcher on the team with a winning record, Billingsly, and he's 11-9. Granted some of that is poor offense, but let's face it, without Penny at All-Star caliber, and Schmidt a complete bust, there is no ace on the staff. And without an ace, there's not much to hope for.

As for the Red Sox, they lose an irreplaceable player. They get Jason Bay, who has tremendous talent and will do very well in Fenway.

If tonight is any indication, the Red Sox got the better of the deal. Manny grounded into a double play in the bottom of the ninth with the potential tying run on base.