I thought I had a 2-year contract with Comcast Triple Play, which was very cost-effective, but our 1-year contract ran out and they raised the price 50%. This gave me the perfect opportunity to switch to DirecTV, which is a zillion times better than Comcast. We get twice as many HD channels, and every baseball game in HD on MLB Extra Innings, and the picture quality is far, far superior. Plus we get 3 months free of HBO, so we get to catch up on movies I never would have paid to see.
This includes THE HOUSE BUNNY, which is a cute and funny comedy. There are quite a few talented actresses in the film who create nice characters (and a few crappy actors who are forgettable). Nice music choices as well. Probably worth a rental.
Posted by Bondelev at 7/30/2009 11:14:00 PM No comments: 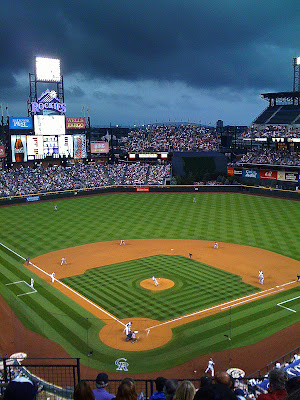 It was a rainy night, but that did not seem to bother Rockies pitcher JorgeDe la Rosa, who pitched a gem of a game tonight! 7.1 innings, 7 hits, only 2 runs, which is a good sign from a pitcher who has lacked confidence in the past.

Troy Tulowitski had an excellent game as well, getting 3 hits and 5 RBI, 3 of them off his homer.

Moving Pictures: Sean Hood - Melancholy Baby
Nice article about film sound by a former student!
Posted by Bondelev at 7/25/2009 09:32:00 AM No comments:

although they forgot my least favorite cliché, the heartbeat to create tension.
Posted by Bondelev at 7/24/2009 06:59:00 PM No comments:

BRÜNO is a very funny but very raunchy movie. In many ways, it's funnier than BORAT, which I enjoyed tremendously, and there are some similarities, but there are a lot of differences as well. This film is about a gay main character, and the sexual content of the film is very strong. I'm not at all a prude, but I was shocked that the film did not get an NC-17 rating. The film is smart in that it puts a lot of offensive material right up front, so that anyone offended will leave right away. (In fact, BRÜNO gets its first laugh in the Universal logo, before the film begins.) There is a pretty explicit music montage near the opening with Brüno and his boyfriend engaging in various forms of anal sex for several minutes. Then there is an entire scene dedicated to a close-up of a semi-erect penis being swung around while dancing. Granted, it is very, very funny, but that has to limit the potential audience of the film.

Also limiting the audience is the amount of gay material, which I imagine may offend some gay men as it plays off of stereotypes. In reality, the film is very supportive of gays. Like Borat, even though the film is a comedy, there is a somewhat depressing undertone to the film. Both films use the technique of placing the character in the real world with real people. In this film, the gay character visits two different religious men to get cured of his homosexuality, as well as going on a hunting trip with three clearly homophobic men. Much of the humor comes from the real-world men realizing that Brüno is gay. We often laugh at uncomfortable scenes, and this movie taps into that.

Interestingly, the most squirm-inducing scene is a visit to (what appears to be) a real "swingers" party, where Brüno stands inches away from group sex and watches. It's strangely uncomfortable, even after watching all of the previously mentioned sex scenes. The film does do a good job - perhaps even better than Borat - of mixing the real-world scenes with scenes that have been scripted and use actors. It's much harder in this film to see the difference and tell where reality ends and the movie begins.

I recommend the film, but only if you have a strong stomach for sexual content. This is definitely not for kids!
Posted by Bondelev at 7/12/2009 05:21:00 PM No comments:

It may only be against the Nationals, but it was nice to see the Rockies win again tonight. Hammel gave up 4 runs, but the bullpen did well, with Embree getting the win by getting only one out on a pickoff (without throwing a pitch!), and Street getting the save. The loss goes to Julian Tavarez. It helped that the Nat's committed 3 errors in the game.
Posted by Bondelev at 7/07/2009 11:00:00 PM No comments:

This is an interesting article about aural public art. It reminds me a little of the Southmoor station in Denver, except this looks better implemented.

Aaron Cook had a great game going, going 5 strong innings, and with the team winning 4-3 into the 8th. But a 6-run 8th by the Arizona Diamondbacks could not be overcome even with a sellout crowd of 49,000 on Independence Day. The Rockies ultimately lost 11-7.

However, since the departure of Clint Hurdle, the team is doing extremely well and still has a good shot at the wild card. To do that though, they will have to pass the Giants by continuing to win games. They have a good home schedule until the All-Star break, so it's possible.
Posted by Bondelev at 7/04/2009 11:06:00 PM No comments:

This is a nice web site for film music professionals. Scott is a very talented music editor who has written several nice columns for them.

NOVA: Musical Minds is a great doc about how the mind perceives music. It's based on Oliver Sachs new study Musicophilia: Tales of Music and the Brain. Sachs is the author of Awakenings and The Man Who Mistook is Wife for a Hat. This show is an analysis of four separate cases, one autistic man who can play the piano by ear, another man with Tourette's who plays drums as therapy, a third woman who cannot hear music as music, and finally a man who was struck by lightning who began to play the piano. If you are at all interested in how the brain perceives music, I highly recommend this.

You can watch the episode online here: