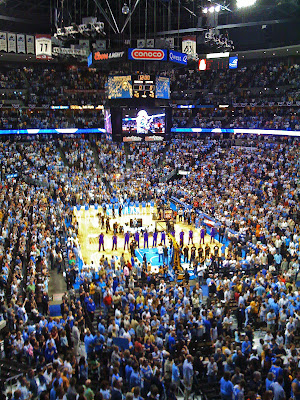 Both teams looked tired in the first quarter, but by the middle of the 2nd, the Nuggets were running on fumes, as though they had not rested in days. The second half belonged completely to Los Angeles. To be honest, that's what I had expected from the whole series. Although the Nuggets are good, they are not an amazing team filled with incredible talent. But after winning in Los Angeles, and with their losses all close ones, they lulled their fans into the belief that if they win their home game, they would then go to Los Angeles for a game seven.

It wasn't meant to be. If you look at only the numbers, Denver did not play that much worse than LA, but if you watched the game, virtually every shot for LA was a quick and easy one (even their foul shots, where they went 100%), and the number of missed shots for Denver was embarrassing. It was fun while it lasted, and I think everyone has high hopes for next year.

The Rockies, on the other hand, are doing so badly (only two years after going to the World Series) that they fired their longtime manager Clint Hurdle and promoted bench coach Jim Tracy. Tracy managed the Dodgers and knows the division well. He is a good choice to succeed Hurdle in that he is, like Hurdle, an excellent clubhouse manager who is well-liked by the players. Tracy is very much a by-the-book manager, almost to a fault. He rarely takes chances. Some might say this is a little too much like Hurdle.

After leaving the Dodgers, Tracy went to Pittsburgh, where he floundered along with the team. Only time will tell if this will be a repeat of that.
Posted by Bondelev at 5/30/2009 09:58:00 AM