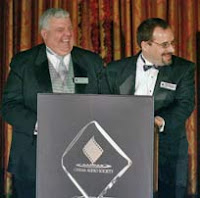 Congratulations to the CAS Award Winners!

As newly elected Vice President of the organization and co-editor of their CAS Quarterly magazine, I was on hand (with Pete Damski) to present the Technical Achievement Award to Digidesign for their Pro Tools version 7.2 software. Digidesign was a double nominee, also nominated for their Icon control surface. The award was well-deserved.

The award for Sound Mixing on a Feature film went to DREAMGIRLS, and was well deserved also. I was surprised to learn that it was Mike Minkler's first award, especially since he is former President of the organization and a Career Achievement Award winner. He has also won Oscars for CHICAGO and BLACK HAWK DOWN. His win bodes well for his Oscar chances this year. The only other Oscar possibility in my estimation is APOCALYPTO, which was not nominated for a CAS award. Re-recording mixer Kevin O'Connell is a perennial bridesmaid at the Oscars, having been nominated 18 times in the past but has never won (a record). This may be his year.

The Filmmaker Award was given to Gil Cates, who is one of the nicest guys in the film business. He has directed Tony Award-winning plays, Oscar-nominated movies, and has produced and directed many Emmy-winning TV movies. He's former president of the DGA, former Dean of UCLA's films school, and managing director of the Geffen. Most of all, he has produced the Oscar telecast 13 times, which means he has to be able to deal with dozens of huge egos in a relatively easy-going manner. (Plus he's Phoebe Cates's uncle!)

Ed Greene was given the Career Achievement Award. Ed is tied for the most Emmy nominations in history with James L. Brooks. I forget the exact number, but it's in the 40s. He does sound mixing for major live broadcasts including the Emmys, Oscars and Grammys, plus the Kennedy Center Awards. He's worked with Gil a lot, so it was a nice tie-in.

The show was hosted by Robert Wuhl, who was funny and kept the show moving even with the lengthy tributes.
Posted by Bondelev at 2/18/2007 12:25:00 AM